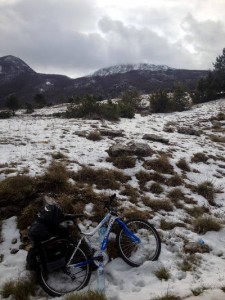 An early start with my gear wrapped in plastic, again I rode and walked the bike up more mountains. Snow started appearing on the slopes and the air grew noticeably crisper. I let my slow, steady pace beat a rhythm of perseverance as I was beginning to doubt whether this had been the best route to start out with – so much incline. At about 11am I reached the top of the final peak of this Kotor mountain road. Bursting into sight was a glorious view of the valley, surrounding snow and pine covered mountains, and the Bay of Kotor beyond. In that moment, every ache and every push was worth it.

Nestled in the valley is Nyegusi, a small town named after Montenegro’s favourite hero Nyegos. There they make the country’s best smoked meat, or pršut (pershoot). I stopped in at a little market and bought a small packet of thinly sliced pršut, along with three bananas for preventing cramps, and a beer. I gave the shopkeeper a 10 euro note and she gave me change of 13 euros, and I couldn’t get her to take it back! Either she didn’t realise, or she was being super sweet, which made my daily budget just that much more comfortable. I rode a little further through the town until I found an outcrop of rocks, propped my bike up, perched myself on a rock and nestled my beer into the snow. Banana, almonds, pršut and beer – a strange but delicious lunch! 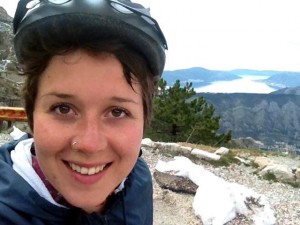 Brit from MeanderBug warned that the road from Podgorica to Kotor through Cetinje and Nyegusi would be far more challenging than the other way via Budva. He also expected that riding down the mountains to the bay would be outstanding. It was. Un-freaking-believable. An hour’s ride, coasting down past snow, then through deep green forests, to warm, sunny Kotor. There are simply no words capable of expressing the beauty of the scenery; aerials view of the ocean and various bays, towns nestled at the foot of the mountains along the shore. It’s hard to believe places like that even exist!

I stopped in Kotor for a coffee before riding the mostly flat road that winds around the bay. Reaching Risan, again I have MeanderBug to thank for putting me in touch with Goran and Antonia, a son and mother who own a set of holiday apartments called Villa Rustica. It’s the off-season so they’re touching up the place ready for April or May when visitors will flood the coast. Generously they gave me a warmly furnished room complete with a kitchenette, balcony with clear views over the town and bay, and invited me to help myself to the abundance of kiwifruit, oranges and lemons in the garden. The house is over 200 years old with lovely details like deep window sills, white-painted double doors and shutters with old-fashioned latches, and sections of exposed stone walls. Despite the age of the building, modern touches make it comfortable like a new bathroom, air-con and heating. I’ll be staying here for a couple of nights, waiting out the rain and exploring the local area with Goran. Lucky me! 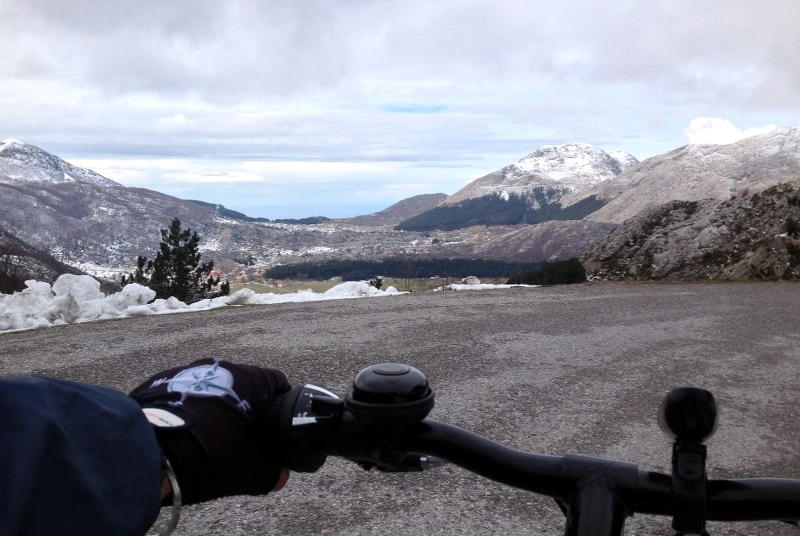 Later: showered and warm, I was just about to prepare a repeat of lunch for my evening meal when Antonia arrived with half a loaf of bread and some delicious cabbage dumplings in soup! She wanted to make sure I ate something hot for dinner. It’s beautiful gestures of hospitality like this that just blow me away, the generosity of strangers that renews my faith in humanity, over and over again.