Story: When we arrived in town, we started asking around for directions. In no time, we met Ali, who offered to help us in any way he could. He showed us around the city and helped us find some things that were on our to-do list. During our time together, he shared his story of being a taxi driver in NYC.

When fighting broke out in Kosovo, he came back to stand with his family and friends. He lost his family in the war. After the smoke cleared, he was unable to return to New York. He had not been able to find a regular job in Prishtina for a number of reasons. Now he does handyman or maintenance jobs when he can get them. He doesn’t have a home. Because of the cold weather, he had secured a month-long lease at the hotel where we first met. 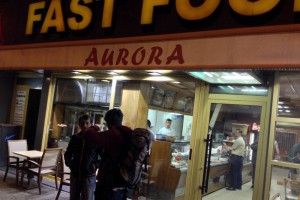 For dinner, Ali showed us one of his favorite places to eat–Aurora, an ideal budget travel spot. He ordered both spinach and meat burek for us along with yoghurt to drink. The burek that we ate and the pizzas that we saw all deserve two thumbs up. We enjoyed our food and conversation with Ali for some time. When we went to pay for the meal, he wouldn’t allow it. He insisted that it was his privilege to pick up the tab. Sadly, but thankfully we agreed. The total for all three of us came to less than 5 euros. It makes for inexpensive travel, but it was a significant sum for Ali. Thanks buddy! Next time it’s on us.

Vibe: We have written here before that the people of Prishtina are gracious. That was true with Ali as well as the guys running the cafe. It was light, clean, and filled with people. It’s a great place to go and be among the locals.

Recommendations: Try the burek with yoghurt especially if you haven’t had it before. I look forward to trying their pizza next time. It looked great. The biggest recommendation, though, is enjoy the people.