We had explored as much of the city as we had time for in 3 days and it was sadly time to hit the road, but we still hadn’t had our ćevapčići (ćevapi for short). So, at 10:00 in the morning we headed over to see if there was any chance they would be open to serve us the first batch. When we arrived, there were no seats left inside (it was cold outside still). The locals were sitting down to a breakfast helping of čevapi. They made room for us to join them at the table as we placed our order. The question wasn’t what will you eat, but how many orders do you want. We chatted until they served our food. And then, with the first bite, we became some of those that will say, “if you go to Sarajevo, you must eat the čevapi.” Must. Eat. Ćevapi. 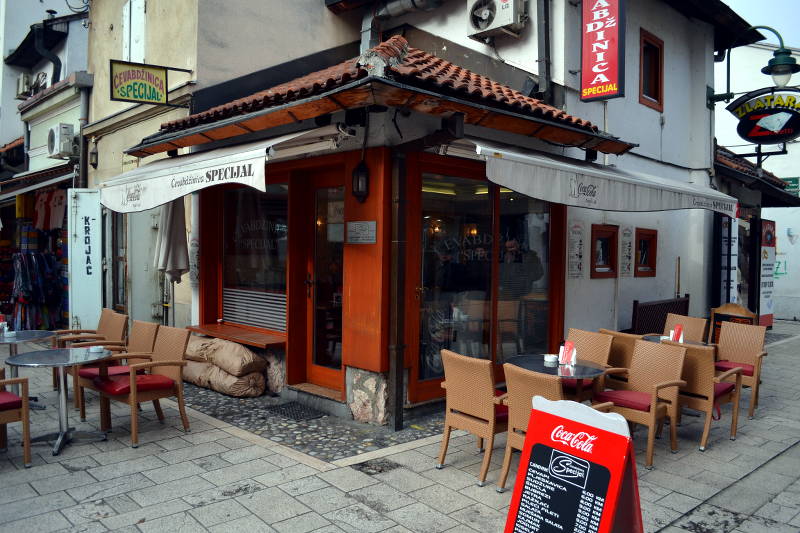 Vibe: Though in the old town, it was all locals this morning. It was a little awkward at first as one of these things was not like the other. But, as we began to talk in broken Bosnian phrases they responded very warmly. The staff were super gracious. Everyone was watching to see if the foreigners would like their national dish. To see our enthusiasm, they were pleased.

Recommendations: Don’t wait till you are about to leave town. Start with this and then figure out how many times you can squeeze it in while you are in the city. Enjoy. And, you’re welcome.

Notes: Ćevapi are made with double ground pork and beef with spices. They are grilled over hot coals and served with a puffy pita bread and diced onion. Here they put the meat inside the bread, and that is a very good thing to do.

It seems that they locals think they are appropriate for breakfast, lunch, dinner, and snacks in-between. Don’t argue with the locals. Join them. I have begun to refer to ćevapi as the Balkan chicken fingers because they are prevalent and kids love them.