With rains falling much of the day in Novi Sad, many festival goers had finished and called it a day after the Pet Shop Boys performance, but a mass was still waiting for the 2:15 am show on the main stage of Exit. After some delays as stage hands and some of the artists milled about, Dub FX took the stage, called out to the crowd, dropped a beat and the show was on. A seasoned busker from Australia, Dub FX (legally Benjamin Standford) kept the crowd fully engaged. The show raced forward for more than an hour. The rains continued to fall. The people kept coming to join in the fun. 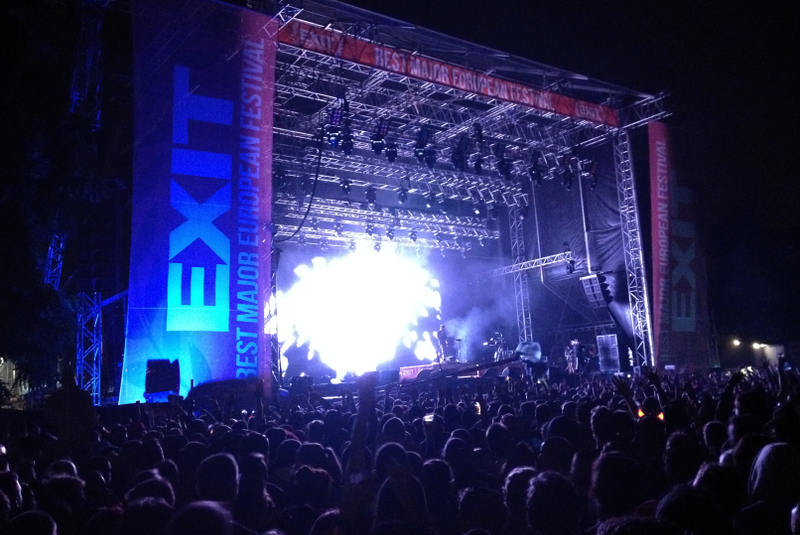 Dub FX is equal parts beat boxer, singer, stage manager, loop station controller, and philosopher, but he is ultimately a street busker. Though on the main stage this night and a growing number of other main stages of late across Europe, he is at home on the big platform because he has performed countless times for, or rather with, people that love music. He had fun. He helped everyone else have fun too. When things went according to plan, he was in his groove. A couple times his sync was off when he made his soundscape loops. No problem. The veteran street busker reworked them and was still in his groove.

The soundscapes that Dub FX creates in his continuing development as artist cover the spectrum of sound while leaving space for feeling and what he calls soul. Starting with the beat, he would then add the bass line(s), a top hat variant, and add in voice effects. This provided an enormous audio backdrop for him to then rap his lyrics in an open range. Together it was complete. Add in the pounding graphics and you have a full sensory experience that is superb.

One element that was obvious in the way Dub FX approached the stage, praised his two-man-band ensemble, addressed the crowd, etc., was that Benjamin Standford wasn’t overly impressed with Dub FX. Sure there was confidence and showmanship, but there wasn’t an over-inflated ego. Much of what Dub FX has learned he has learned from others. From metal band experiences, to performing in a jazz band, to letting kids on the streets in the UK teach him about music development, he has been a learner. He has learned what moves people and as an accomplished busker, he is now doing street performances from the main stage.

To hear Dub FX on ego, check the below video at the 46 minute mark. Be sure to stay with it through at least 49:00. This is Dub FX the philosopher at his best.